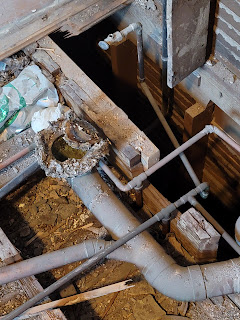 Since I started on this bathroom renovation in my circa 1900 Victorian home, various people have asked me why I bought #thisoldhouse. I mean, there are always issues in older homes, right? Who knows what has been done to them over the years?
Here's an example of what these well meaning friends were alluding to.
This photo displays what was revealed when we pulled up the floor so that we could reroute the plumbing to a more sensible configuration than the bathroom currently boasted. Small but interesting backstory.
When I had the home inspected, the inspector specifically pointed out the toilet in the upstairs bathroom. He said the flooring felt "soft" around the toilet and possibly indicated an old unresolved leak. I wanted to replace the toilet anyway, so I shrugged it off as something I would plan to deal with early on. I knew I wanted to renovate the room. Once I had moved in and had time to really check things out, I noticed that the back of the toilet was kind of... leaning back. I was curious why.

Well, here you can see why. Our investigation revealed that not only were pretty much all the joists in the bathroom floor cut away for various iterations of plumbing in a higglety pigglety unsafe way, but behind the toilet, the joist that should be there was completely missing. It was just... gone. Now it was clear why the toilet was leaning back!

Martin, my debonair and extremely knowledgeable GC, was not phased. He'd seen it all before and knew what to do. Jesus, the lead on my project, called in some muscle to help. After consulting with an engineer friend and a quick trip to the supply store, we had about a dozen MLBs (Micro Laminated Boards) that would be sistered to all the existing joists, bringing them up to and essentially well beyond the required by code weight bearing ability needed to support both a living area and a heavy soaking tub.

Project completion delayed by: about 1.5 days (Jesus originally predicted 3 days but to try to stay on schedule called in some additional helpers)

Project cost impacted by: about $3700

As far as I am concerned, it could have been worse. And now when I finally enjoy that well earned soak in my soaking tub, I won't have to be concerned that I might end up in the kitchen.

Here are some more photos from today - oh yes, we are at about day 7 of an expected 20-25 working day project. I called this "the discovery phase". Tomorrow, the plumbing phase begins. 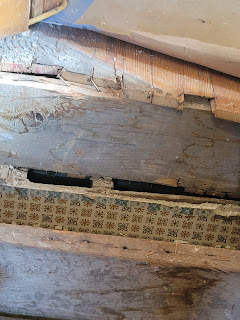 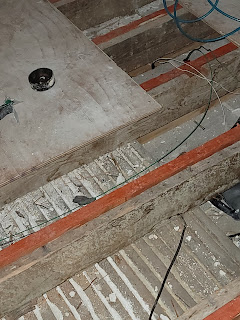 The now-sistered joists, ready for action.... 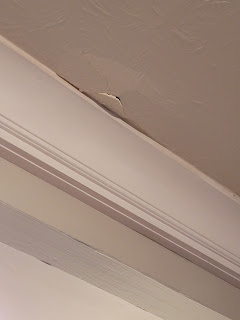 You can see the downstairs ceiling is starting to crack in places from the pounding required to get the MLBs in place. Martin and Jesus promise they will fix all these little problems once the renovation upstairs is done.

The Players on this project:

GC and chief shoulder to cry on: Martin Kujawa

The brains of the operation: Jesus Ortiz

Oh yes, lest I forget - Martin explained to me why we love these old houses. It's because the years have brought them to where they exude a visual charm - they have an inhabited soul that sparkles.

That explanation works for me.

You saw her bathing on the roof...

Or - the unstoppable force meets the immoveable object.... Today was the day that we moved the big cast iron clawfoot tub from the garage t... 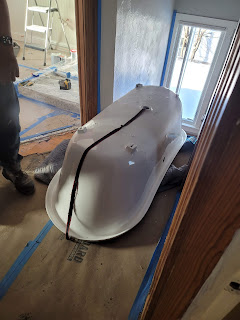